The purpose of MTA is not just to develop successful players, but also successful people.
Leaders are developed, and sports is the perfect vehicle in which to hone these skills in young people. The MTA Leadership Academy Speaker Series represents another shining example of MTA’s commitment to excellence.  The Speaker Series will provoke thought and self-reflection for our players and parents alike through a series of discussions by selected speakers. While the topics and color around these discussions will change from session to session, our hope is that our players can learn much more than soccer and can take away a better understanding of what it means to be a great teammate, leader and person.

While several of the speakers have already been scheduled the club remains open to discussion and suggestions of other potential influential people. Do you know someone who would be a great speaker for our athletes to hear from? Please send us an email with the details.

“If your actions inspire others to dream more, learn more,
do more and become more, you are a leader”

Our second season of the MTA Leadership Academy Speaker Series kicks off on Monday, November 22, 2021 with Tony Sanneh – the most successful and decorated mens soccer player from Minnesota, and President & CEO of The Sanneh Foundation.
Our Leadership Academy Speaker Serires will provide our players with great opportunities to learn a holistic approach to leadership and we hope to inspire our players to be leaders!

The series will consist of 1-hour interviews with our speakers, that will be carried out virtually between November and March.

The 2021-2022 Season Speakers: (Use tabs to register or to view speaker interviews) 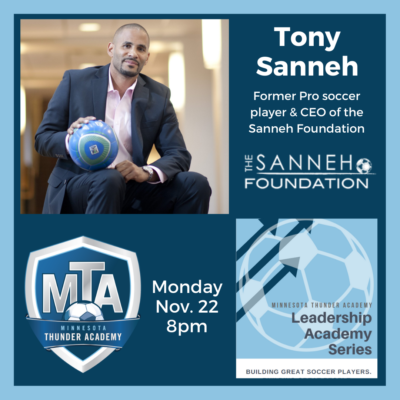 The most successful and decorated men’s soccer player from Minnesota, Tony Sanneh had a phenomenal career as a professional soccer player, including 43 appearances on the US Mens National Team.

A highlight of his time with the USMNT, Tony played every minute of every game in the 2002 FIFA World Cup.

In 2003, while still at the height of his professional career, Tony created The Sanneh Foundation (TSF) to leverage what he saw as soccer’s unique potential to create positive social change for youth. Since his official retirement from soccer in 2010, Tony has served as President and CEO of The Sanneh Foundation, as well as a Sports Envoy for the US Department of State. Tony believes in giving all children the opportunity to learn, grow & succeed. With The Sanneh Foundation, he seeks to accomplish that goal through its programs, partnerships and events. 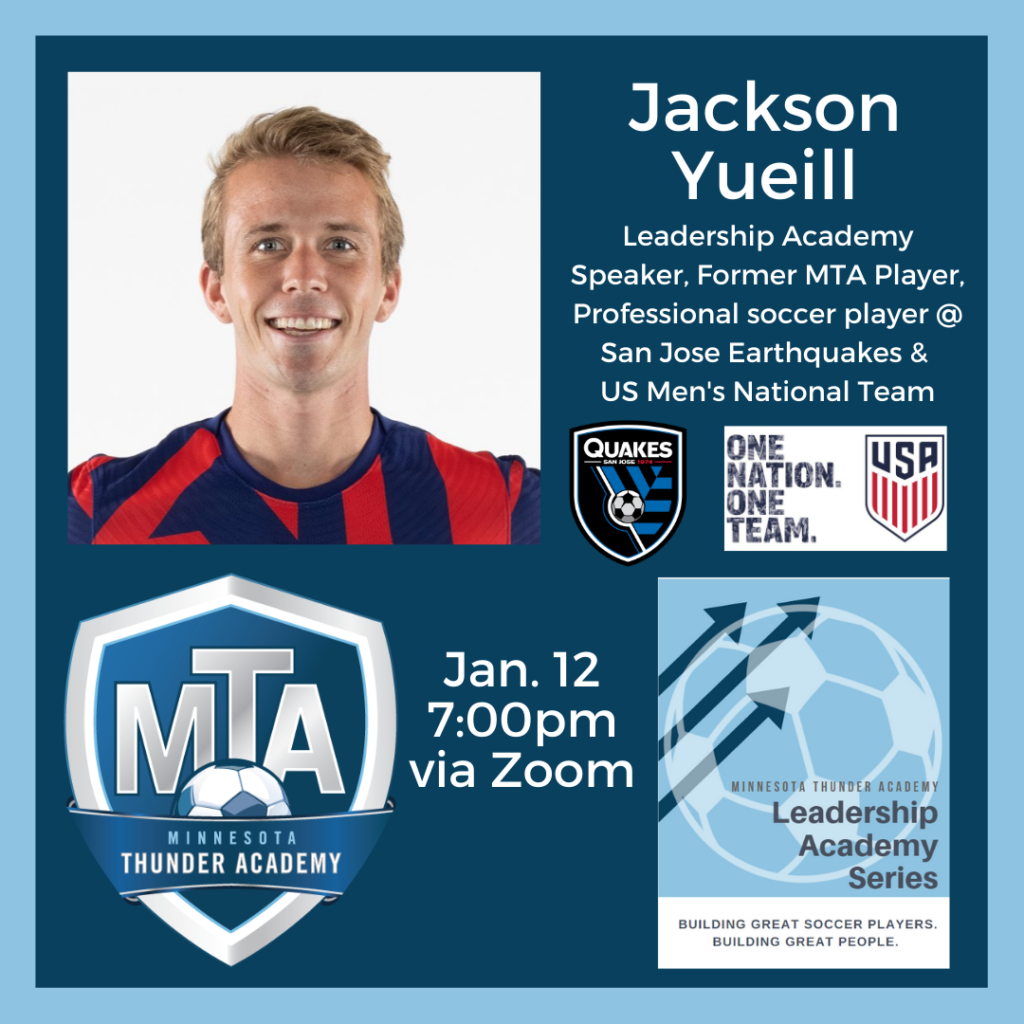 Jackson Yueill grew up in Minnesota playing soccer at Ramalynn Academy, Bloomington Jefferson HS and Minnesota Thunder Academy. Jackson now plays for the San Jose Earthquakes in MLS and has made 15 appearances with the US Men’s National Team. He recorded the interview while at the Jan 2022 USMNT Training Camp. 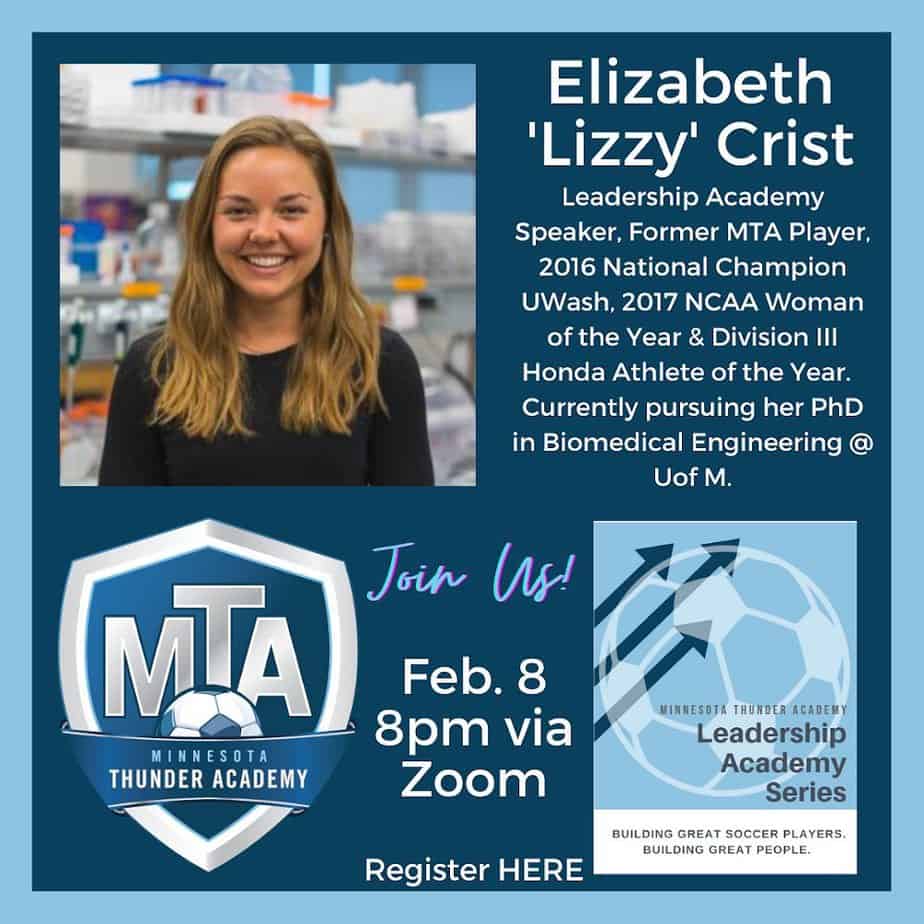 Lizzy grew up in Minnesota and played in the ECNL with Minnesota Thunder Academy.

She graduated from Washington University in St. Louis (WashU) in 2017 where she played as a goalkeeper on the women’s varsity soccer team. In 2016, she led her team to win the National Championship, and she was named the 2017 NCAA Woman of the Year, Division III Honda Athlete of the Year, and one of the NCAA Top-10 Student Athletes.

Lizzy is currently working on her Ph.D. in Biomedical Engineering at the University of Minnesota, and her research is focused on studying breast cancer metastasis.

In addition to research, Lizzy participates in programs and spearheads initiatives to promote mental health and increase diversity, equity, and inclusion in STEM. 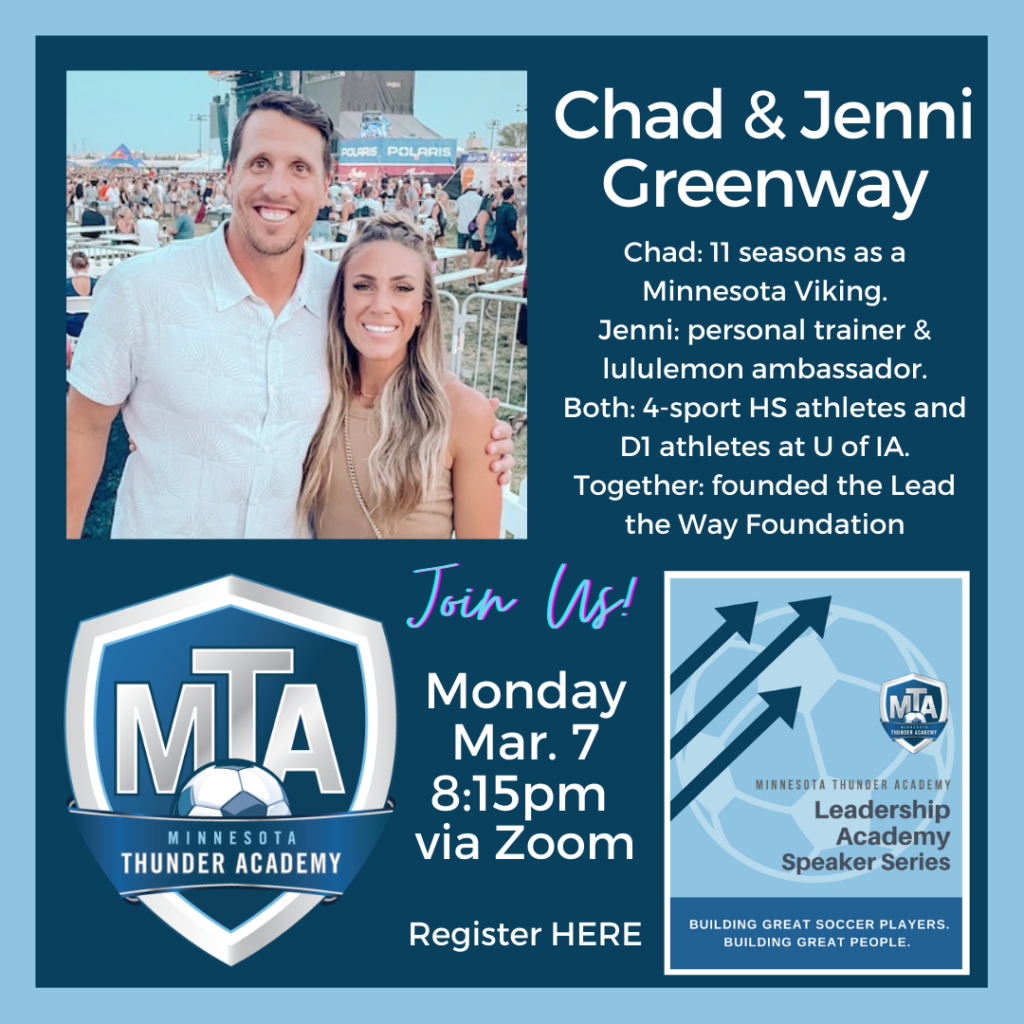 Chad & Jenni Greenway have called Minnesota home since Chad was selected 17th overall in the 2006 NFL draft to the Minnesota Vikings. Chad played 11 seasons in the NFL, all of them with the MN Vikings. Jenni has been a personal trainer and group fitness instructor since 2008, and is a lululemon Ambassador.

Both Chad and Jenni were 4-sport athletes in high school, and collegiate athletes at the University of Iowa. They have been leaders on and off the field through college and professionally, and now continue to raise the bar high; earning numerous awards, achievements and accolades.

Chad & Jenni are raising four daughters and running the Lead the Way Foundation, a nonprofit they founded together, which focuses on helping kids and families that suffer from Childhood disease.

We are excited to kick off our new MTA Leadership Academy Speaker Series, which will provide our players with a great opportunity to learn a holistic approach to leadership and inspire our players to be leaders!

The series will consist of four 1-hour interviews with our speakers, that will be carried out virtually between December and March. 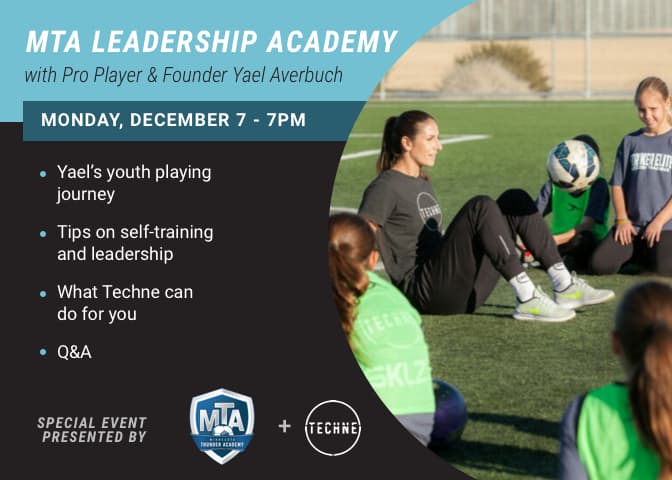 Yael grew up in New Jersey and went on to attend the University of North Carolina, where she was part of 2 NCAA Championship-winning teams. Her jersey #17 was retired at the end of her collegiate career and she went on to play professionally for 10 years, all around the U.S. and the World. Yael has also represented the United States at all levels of the youth and senior National Teams, including 26 caps for the U.S. Women’s National Team. As an active pro player, Yael founded the National Women’s Soccer League Players Association as well as Techne Futbol. 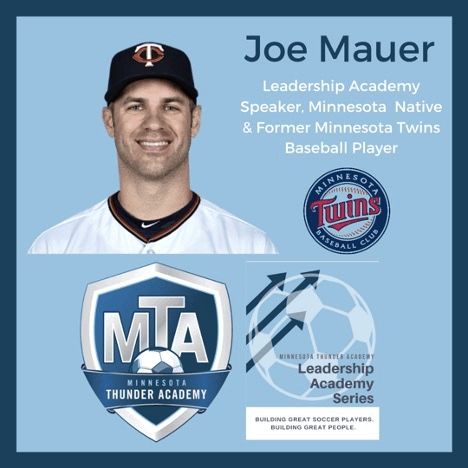 December 21, 2020  7:00pm via Zoom
Joe Mauer is a former catcher, designated hitter, and first baseman who spent his entire 15-year career in Major League Baseball with the Minnesota Twins.

He attended St. Paul’s Cretin-Derham Hall where he had a successful career in three sports – baseball, basketball, and football. He was the first-ever athlete to be selected as the USA Today HS Player of the Year in two sports (football and baseball).  He gave up a football scholarship from Florida State to take part in the 2001 MLB draft where he was selected as the first overall pick by the Twins.

Joe retired in 2018 from the Twins, currently still lives in Minnesota, and has three children with his wife, Maddie. 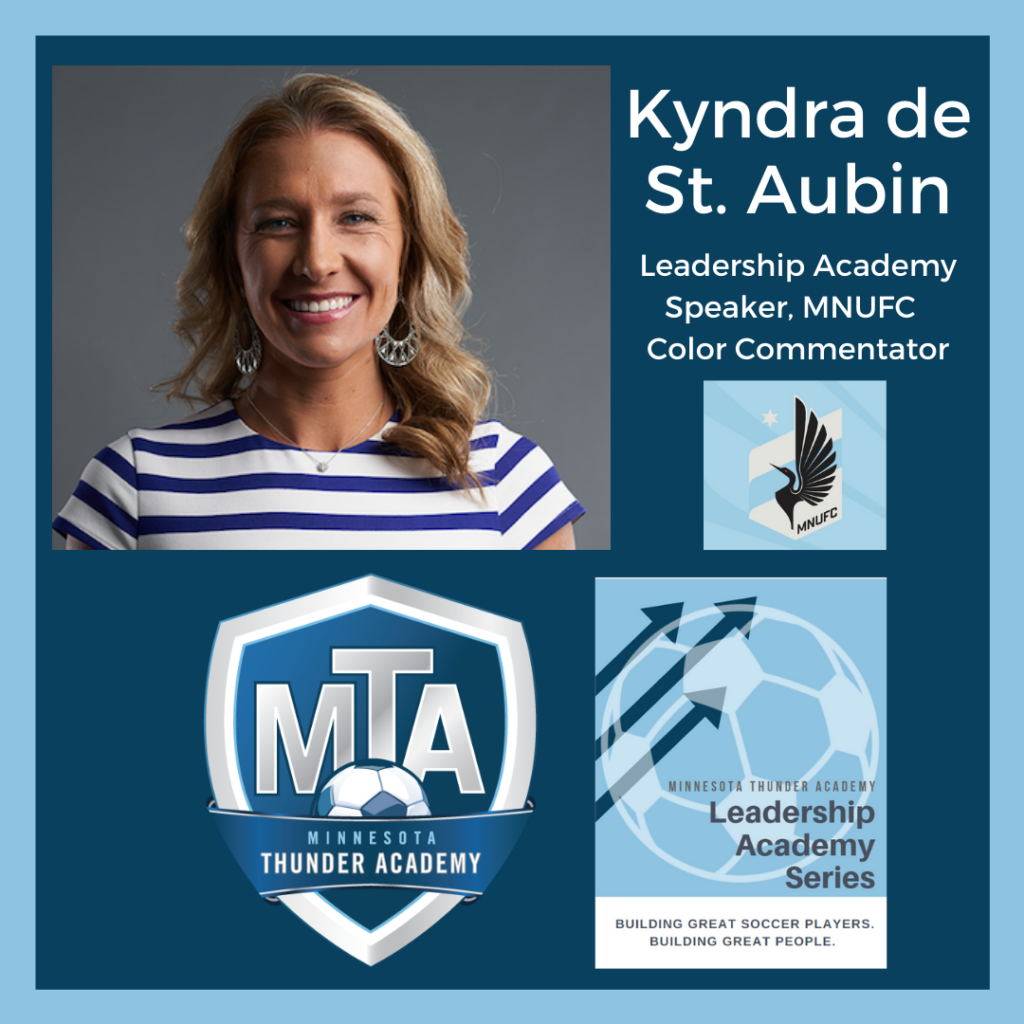 Kyndra de St. Aubin is a former U of MN soccer star, lettering twice. She is one of the most experienced broadcasters in American soccer, and has been color commentator for the MNUFC broadcast team since the 2017 season.
Kyndra has been part of Fox Soccer’s coverage of the U.S. Women’s National Team since 2011 as a color commentator & sideline reporter. She was on one of five  broadcast teams selected for coverage of the 2015 Women’s World Cup, has been in the booth for coverage of the Women’s Professional Soccer League, and continues to be lead analyst for the National Women’s Soccer League.

Kyndra has covered MLS regular season and playoff games as well as the U.S. Men’s National Team during Copa America 2016. In addition to her professional soccer coverage, she has been analyst for women’s college soccer, basketball, and softball for both the PAC-12 and Big Ten Networks. During her career, she covered pro teams in WI and AZ as a beat reporter, and was a host on ESPN’s SportsCenter. 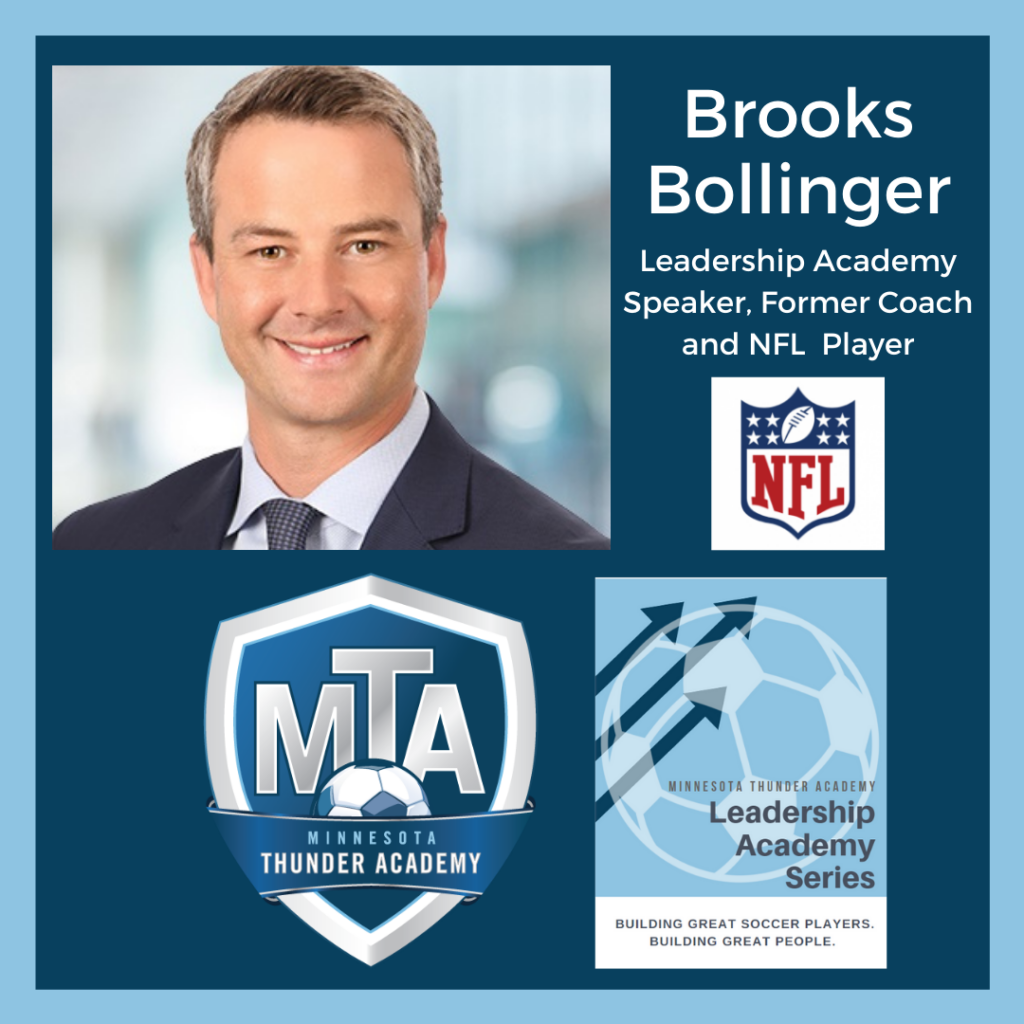 Brooks is a former NFL quarterback, having played 5 seasons in the league with 4 different teams including our own Minnesota Vikings. Brooks has also held coaching positions at the University of Pittsburgh, Hill Murray High School and most recently Cretin-Derham Hall where he served as the school’s head coach. His youth athletic career started in Grand Forks, ND where his list of achievements made him one of the best athletes the state has ever produced. A 4-year, all-state starter at quarterback; Gatorade Player of the year; a two-time all-state point guard on a state championship team, and an all-state baseball player drafted twice by the Los Angeles Dodgers. Most notably, Brooks continued his education and athletic career at the University of Wisconsin, Madison where he started for 4 years and led the Badgers to a 2000 Rose Bowl win. In 2017, Brooks was deservedly inducted into the University of Wisconsin Athletic Hall of Fame.

MTA’s Juniors Camp is designed to introduce players to the core training & tactical activities that coaches implement with the MTA Elite Academy.  The experience emphasizes the values and philosophy of the MTA program.

MTA  Camp is designed to introduce players to the core training and tactical activities that coaches implement with MTA’s ECNL programs and the MTA Elite Academy. The experience emphasizes the values and philosophy of the MTA program so the players have an understanding of what evaluation criteria are used during the tryout process.

MTA’s Girls College Soccer ID Camp, open to all, is hosted by MTA and is designed to introduce players to some of the top coaches in the midwest while competing with other top girls from Minnesota.

MTA School Holiday Camps are held on days when school is not in session. Martin Luther King Jr Day in January, Presidents Day in February, Thanksgiving weekend, Winter break, etc are all times when camps may be held. Holiday Camp dates will change annually.